Revolution Void featured on DISS
Dave's Imaginary Sound Space (DISS) is a site by Dave Holmes, that covers such topics as (in his own words) "digital audio & music, podcasting, video, multimedia, open content tools, & sundry exotic web references." Sounds like that covers just about everything interesting about the internet. ;) Definitely my kind of site ...

Check out the great review of Increase the Dosage, reproduced in its entirety:

I love Legal Torrents -- I subscribe to their RSS feed and download from them all the time! They are a great resource for Creative-Commons-licensed and otherwise legally-distributable works. Besides music, they also have audiobooks, films and more. Legal Torrents is a hallmark of the information-age rennaisance. Live it up!

Reviews of all types of electronic music: in-tune.blogspot.com

The latest Revolution Void album Increase the Dosage has been released
to the public under a Creative Commons license.

The web-release comes with artwork by Shawn Wolfe.

Kurt Elling does the unthinkable -- lyrics to a 'Trane solo!

This is truly an amazing thing: Kurt Elling has lovingly reproduced the already-amazing Coltrane classic Resolution from A Love Supreme, with his voice as the solo instrument. Yes, he has indeed written lyrics to an entire solo by John Coltrane - one note per syllable, to pinpoint precision. I've listened to the original and compared with this recording so many times, I can only believe that Elling locked himself up in a closet for 6 months listening to Resolution on repeat, channelling lyrics from a higher intelligence. Did I mention the lyrics are really good, too? A sampling:

But as he came into view the witness saw his eyes were crying.
Tears like blood fell to earth - as he watched heaven disappear in the void - up the drain into the paraboloid - realizing it all - everything -everywhere -into his eyes - seeing that all - he had beloved - went out of itself and away - here in this last ever surge of a day tearing all meaning away - and to the witness's indifference he had this to say:

"I know about birth. I know about death, and how the light goes out of men - the life departing - powerless
giving it up - but in the vast indifference I invent a deeper meaning.

I'm the one who will say 'use the will every day or go mad trying - go to war against the impotent side of living.

Use every power your given to stand and act like a man.

And pray -- every day to every god - strike the bowl of heaven and the ringing will become a law.

Build - bridges where you need to go - bring the fire of enlightenment here to life below.

Speak - mercy to the things you meet - listen up to hear the whispering of the blood you bleed.

Stay awake - no mistake - dance the dream awake - and awake."

For more info on this great modern jazz singer, check out www.kurtelling.com.

This album could have been so much more. It could have been a picking-up where The New Standard (1995) left off, a launching point for spontaneous improvisation. It could have been an opportunity for some of the greatest modern jazz players to improvise without the confines of over-complex chord progressions, the simplicity of the harmonic content allowing the musicians freedom to explore and go wherever the music takes them. Instead, it is a flat, dry, unashamedly commercial affair that has a cast of characters including Christina Aguilera (!), Sting and Santana.

Whereas The New Standard followed the time-honored tradition of jazz music to re-interpret and even re-invent songs from the pop idiom, Possibilities is, simply, pop. This album fails to satisfy even the most basic pre-requisites for maintaining my interest, so I give 1 out of 5 stars. 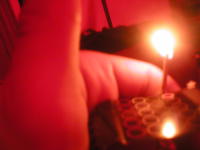 The focus of this blog will be to review and discuss music that falls under the category of electronic breaks, jazz, or a combination thereof.

This is a companion blog to revolutionvoid.blogspot.com, which is for news and updates regarding the electronic music project Revolution Void. (www.revolutionvoid.com)

I have seen a lot of spam posted in the comments on Blogger, but I've still left the comments open. Why? Because the internet is about interactivity, and we can't let a few spammers get in the way of that.

By the way, posting a canned message that is relevant to the topic at hand (ie: electronic breakbeat jazz) will not be considered spam, so feel free to do so.

I'm a musician living in Seattle. I make electronic jazz music under the moniker Revolution Void. My music is a mix of electronic breaks and jazz improvisation, featuring solos from some of the top players in modern jazz such as Seamus Blake, Lucas Pickford and Matthew Garrison.